The following Code of Conduct has been approved by the IAU Officers in Paris, Jan 27th, 2016 and must be respected during the IAU 356 symposium

The IAU opposes any discrimination or harassment based on such factors as ethnic origin, religion, citizenship, language, political or other opinion, sex, gender identity, sexual orientation, disability, or age.

It is the IAU policy to follow the regulations of the International Council for Science (ICSU), and the IAU concurs with the actions undertaken by their Standing Committee on Freedom in the Conduct of Science on non-discrimination and universality of science.

The IAU is therefore committed to prevent any incident of harassment that may occur during the General Assembly, Symposia, Focus Meetings, and in general in any activity of its scientific bodies in which the IAU has or shares responsibility. This includes any social activities and informal gatherings attached to the above mentioned events.

Harassment incidents or behavior that occur outside the IAU activities will be considered only when a formal investigation of the case has been conducted by the relevant authority (e.g. the Institute to which the individual is affiliated) and made known to the Executive Committee of the IAU. In those cases that involve an IAU Member, the Executive Committee may decide to take disciplinary actions against him/her.

The following guidelines are specifically addressed to the Chairs of SOC and LOC of IAU GA, Symposia, Focus Meeting and to the Presidents and Chairs of Divisions, Commissions and Working Groups in order to prevent any form of harassment or retaliation, providing an inclusive atmosphere that encourages the free expression and exchange of scientific ideas.

In general, harassment is a conduct that exerts unwelcome pressure or intimidation. This conduct includes, but is not limited to: epithets, slurs or negative stereotyping; threatening, intimidating or hostile acts; denigrating jokes and display or circulation of written or graphic material that denigrates or shows hostility or aversion toward an individual or group.

Particularly serious is the sexual harassment that refers to unwelcome sexual advances, requests for sexual favors, and other verbal or physical conduct of a sexual nature. Because of the wide international nature of the IAU, it is important to realize that behavior and language that are welcome/acceptable in one particular cultural enviroment may be unwelcome/offensive to another. Consequently, individuals must use discretion to ensure that their words and actions communicate respect for others. This is especially important for those in positions of authority since individuals with lower rank or status may be reluctant to express their objections or discomfort regarding unwelcome behavior.

All meeting attendees have a role to play in creating an inviting and harassment-free environment through their own behaviour and the discouragement of harassing behaviour in others.

It is the responsibility of the Organizers of IAU Meetings to inform all participants about the IAU policy on harassment and to instruct the Sessions’ Chairs on the procedure to be followed should an harassment incident occur during the scientific sessions.

In the eventuality of a clear case of verbal harassment during a scientific session, the Chairperson should act immediately to stop it. If the situation deteriorates, he/she should ask the involved people to leave the room.

If any form of harassment occurs in a less openly visible way (e.g. during social activities or informal gatherings), the affected person and/or witness should immediately report it to one of the Organizers. The affected person has the option to pursue a formal procedure. In this case, the Organizer should make written notes of the incident, attaching any possible evidence and indicating any witnesses. The Organizer should then give the alleged offender the opportunity to be heard and respond to the complaint or allegations. A full report about the incident should then be sent to the IAU Assistant General Secretary.

The Assistant General Secretary will promptly report to the IAU Officers any case of harassment that occurred during an IAU meeting. The Officers will appoint an investigation board (typically composed of EC Members) which will evaluate the case and eventually conduct hearings with the involved parties. At the conclusion of the investigation the EC may decide to take disciplinary actions which could include the prohibition to chair IAU meetings and/or to participate in IAU scientific bodies. Retaliation is strictly prohibited. 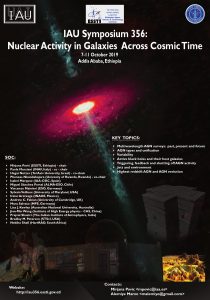